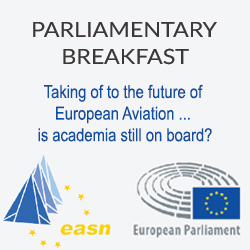 On the 12th of April 2018 the European Aeronautics Science Network (EASN) Association organized the 2nd Parliamentary Breakfast in the European Parliament, hosted by MEPs Dr. Dieter-Lebrecht KOCH - Vice-chair of the Committee on Transport and Tourism (TRAN) and Ms. Monika Hohlmeier - Chair of the Intergroup "Sky & Space". The event was guided by the topic: "Accelerated impact of academic aviation research for improved air transport for all European citizens". After the welcome introduction of the hosting MEP Dr. Dieter-Lebrecht KOCH, three speeches were given by Mrs. Clara de la Torre - Director of Transport in DG Research & Innovation of the European Commission, Prof. Spiros Pantelakis - Chairman of the EASN Association and Dr. Helge Pfeiffer - General Secretary of the EASN Association. The speakers reported on successful European research programmes and initiatives obtained by the different stakeholders in the ecosystem of aviation research and expressed their respective views on policies and contents for future research programmes where the academic world also has an important role to play.

8 MEPs had originally registered at the event and took also partially actively part in the discussions. Moreover, the Parliamentary Breakfast attracted the interest of many high-level aviation stakeholders and policy makers.

The Parliamentary Breakfast was followed by an Open Workshop on the same topic which took place at the premises and with the strong support of the European Commission. The structure of the Workshop gave the opportunity to the attendees to have a look into the 30 years history of aviation research in Europe. In this frame, a number of success stories of the impact created by the academia as well as the lessons learnt and the expectations by the collaboration of Academia and Industry throughout the years were presented by the invited speakers. The involvement of Academia in Public Private Partnerships (PPP) has also been illustrated and further engaged and motivated. Furthermore, the promising "Open Innovation Tests Beds" concept of the Commission, which supports the priority of open innovation set by Commissioner Moedas has been presented. In order to support the "Missions" concept and to enable opportunities within FP9, EASN presented its proposal for the development of dedicated open-access platform demonstrators of Unmanned Aerial Systems with adaptable aircraft technologies. These demonstrators are expected to become "open-access" test beds for boosting the innovation of all relevant technologies for all interested stakeholders. They should focus on fast implementation of the developed technologies in order to respond to the accelerated innovation cycles. Moreover, the regulatory framework, the state aid strategy and perspectives and the related opportunities on public subsidies were presented. Last but not least some funding models for FP9 were discussed.